Skip to content
Home » Chickens » What Is Considered Poultry?

When raising chickens, investing in a high-quality chicken waterer is vital. In this article you can find out more about the two meanings associated with the word poultry: poultry as domesticated birds, and poultry as in the meat that you can purchase from any local store. We have included the most popular classification of poultry as well as a historical overview of the process of bird domestication.

Why is this word so ambiguous?

The reason why poultry is a word that can be classified as ambiguous has to do with the two distinct meanings that it encompasses. On the one hand, poultry is used to describe all kinds of domesticated birds that humans raise for their meat, feathers or eggs.

On the other hand, the same word is used when referring to birds that are killed for their meat. However, birds that are hunted for food or sport are not called poultry. The correct word for these birds is game.

Etymologically speaking, poultry derives from a Latin term, pullus, that means small animal. The word that we use today comes from a French word, poule.

When did the domestication of birds begin?

According to researchers, the domestication of birds began 7,000 years ago. This estimation was made after fossils dated from 5400 BC were discovered in China. However, scientists argue that, at first, chickens were kept for cockfighting. Only later, they started being raised for food and feathers.

The rise in numbers can be explained easily. In recent years, more and more poultry farms were opened to meet the rate of meat consumption. Today, poultry is the fastest-growing meat sector. Also, raising livestock, including poultry, accounts for more than 20% of the total global use of water in agriculture.

Recently, numerous activists and organizations have started to raise questions regarding the ethics in the poultry industry. The main issue is that there are no clear guidelines as to what conditions can be marked as good or bad in this rapidly growing sector.

The main issues with free-range chicken farming are the following. Firstly, chickens usually spend their time in cramped sheds that have no windows. Because of the lack of space, the chickens often pick at each other and they get hurt as a result.

Secondly, often chickens are fed too much and, therefore, many of them are not able to walk because of their weight. Because of this, some of them end up dying in extreme pain.

Thirdly, most chickens are killed at just six weeks of age. This is possible because they reach the size of an adult chicken due to selective breeding. The rapid growth of poultry can also cause fatal or crippling health problems.

There are four types of poultry: chickens, guineas, geese, turkeys, and pigeons. Poultry is popular because it is rich in proteins and because it has a neutral flavor that makes it easy to prepare in various ways. It is currently the second most widely eaten type of meat after pork.

Guinea fowls are also raised for meat. However, they also have a more practical use as they are also utilized for pest consumption. Their meat has more flavor than that of chickens and their eggs are richer in nutrients.

Turkeys are also farmed for their meat and feathers. Turkeys are usually eaten as the main course during Thanksgiving in America, and during Christmas in english-speaking countries in Europe. White turkey meat is said to be healthier than dark meat.

The messenger of peace, the pigeon is also domesticated for meat. When it is raised for meat, it is referred to as squab. Those who sell pigeon meat commercially usually raise a special breed called the King pigeon. 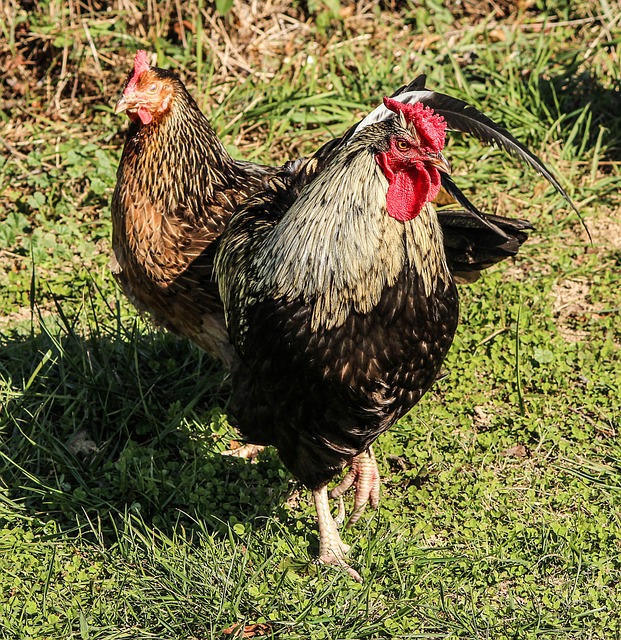 Other birds that were domesticated for meat

Emus were first domesticated in the 20th century. They are used for leather, meat, and oil. Because of its exploitation, some breeds of emus from various regions of Australia went extinct after the European settlement in 1788.

The Indian peafowl was also raised for its meat, feathers and it is often kept as an ornament because of its beautiful plumage. The same is true in the case of the Mute swan.

Ostriches were domesticated in the 20th century. Their meat is very rich and delicious but also very expensive. Moreover, they have red meat instead of white meat. The first ostrich farm was established in the 1860s, in South Africa. The practice spread and today there are numerous ostrich farms all around the world, including in the USA.

Interesting predictions about the poultry industry

According to recent studies, the consumer demand for poultry is higher in economically developed counters. Even more so, at the current time, Australia is now the rank holder for the highest per capita consumption of meat in the world.

The cost of poultry production varies depending on the region. The cost of poultry farming is the lowest in Brazil, and the highest in Japan. Plus, it seems that social changes drastically affect the development of animal-protein markets. For instance, in Asia and Latin America, the retail sales for meat substitutes are higher than in other parts of the globe.

It is expected that, in the next 20 years, the consumption demand for poultry and animal meat, in general, will increase with up to 35%. Additionally, poultry consumption in Africa will most likely raise annually with up to 5%.

Because the cost of production of poultry is lower in the south and south-east Asia, countries such as India, Indonesia, the Philippines, and Vietnam will most likely become vital global markets for growth.

The future of poultry farming

Given the numerous recent discussions surrounding the topic of poultry farming, new methods of farming will most likely be utilized in the future. A new type of broiler production chain that meets the standards of animal health and welfare is now developed.

An important aspect that will be integrated into this new kind of farming is technology, more exactly, we are referring to artificial intelligence. In other words, scientists are looking for ways to make the machines used in this industry smarter.

This means that the new machines will be able to cater to the needs of the animals and the customers as well. Future farms will be more respectful of the environment and the animals being raised for meat, eggs, etc.

What is more, tech innovations will be used so that each customer will receive food recommendations based on one’s personalized nutrition needs. The machines will also have an important role in assisting customers to shop for the necessary ingredients and also cook them.

In a recent experiment in Germany, scientists have tried to analyze if dual-purpose hens can be used in poultry farming. In short, instead of using different chicken lines for meat and egg production, the researchers used a dual-purpose chicken.

At the end of the 3.5-year experiment, it seems that, if dual hens are used in poultry-farming, the price of eggs will most likely increase. Yet, most of the consumers that were interviewed and presented these results said that they were happy with paying more when buying eggs.

Another aspect that has to be considered is that, differently from regular species of poultry used for meat, dual-use hens grow slower and they have to be fatten twice the amount of time.However, it should be stated that the dual-purpose hens were overall calmer when they were slaughtered and that they kept their full plumage during the experiment.

Additionally, it seems like dual-purpose chickens have a lower protein requirement when compared to the regular species used for poultry mass production. Because they eat less, there are ecological, as well as economic benefits to introducing dual hens in poultry farming.