Skip to content
Home » Cattle & Bees » Can Cows Have Twins?

Breeding habits in cows are different than in other ruminants or animal species, so we suggest you keep on reading this article below and check here for more information on milking machines.

Additionally, you will learn how to handle pregnancies, how to deal with newborn calves and how to always provide the right amount of food by putting some new cattle feed bunks in their cribs.

We should start by saying that cows are one of the most popular animals in the world, bred for their delicious meat, milk, and beautiful skin. Each part of a cow is of use for humans, and this is why these ruminants are spread almost everywhere around the globe and can adapt to various environments and temperatures.

Although most ruminants, including sheep and goats, often give birth to twins or even triplets, cows mainly have one calf at a time. And, just like humans, cows are pregnant for nine months.

The average gestation length depends on the cow breed but it is usually around 283 days. However, it is known that cows delivering bull calves (males) have a longer gestation than those giving birth to heifers (females) by a few days.

Cows can live for around 20 years and are ready to give birth starting at the age of two-three years. Thus, they can theoretically give birth to up to 17-18 calves during their lifetime, sometimes even more.

After they have given birth and taking into account other special conditions and the postpartum period, cows can get pregnant again after 50-60 days, depending on the breed as well.

Can cows have twins?

Both beef and dairy cow breeds don’t usually give birth to more than one calf but twins might occur in 5% of the cases. However, twin pregnancies pose serious risks for both the mother and the babies, so this is why they are not encouraged.

If a cow gave birth to twins once, it is more likely to repeat the performance in her future pregnancies, which may cause serious health problems to her.

One of the reasons why twin pregnancies are difficult for cattle breeders is because one of the babies isn’t positioned right, so delivering is turned into an even more painful situation that more often requires the help of a vet.

Another reason for concern is that in many cases, one of the babies or even both of them won’t be delivered alive or will die shortly after coming into the world. Moreover, there is a strong belief that if the pregnancy results in one heifer and one bull, the female will grow to become infertile.

Freemartinism represents one of the most complicated forms of sexual abnormality in cattle since the condition causes infertility in the twin pregnancies resulting in one sterile female calf and one male.

Although a freemartin is genetically a female, it does come with the characteristics of a male because they both share the placental membranes connecting the dam to the fetuses.

This causes the fluids to be mixed and exchange of antigens and blood carrying genetic characteristics that are unique for the bull and heifer. In other words, each of the twins will be born bearing characteristics of the opposite sex. Although this rarely affects the fertility of the bull, heifers won’t be able to produce offspring.

If both twins are of the same sex and survive, there aren’t many reasons to be concerned about their abilities to reproduce. 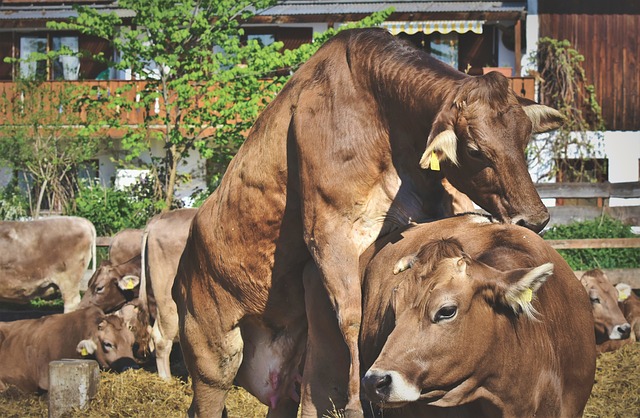 Giving birth to two babies is quite a rare event in the cattle world. Although the odds of having twins are rare, it still occurs in 3-5% of the cases, depending on the cow breed and genetic features.

However, there are cases of multiple-fetus pregnancies, including triplets and quadruplets. If you’re wondering about the odds, for quadruplets it’s about 1:700,000. As you could expect, the odds of giving birth to same-sex babies, in this case, are even smaller, about 1 in 2 million for triplets and one in 179 million for quadruplets, according to the Veterinary Obstetrics and Genital Diseases.

Unfortunately, the more fetuses result in a single pregnancy, the higher the risk for at least one of them to be born dead.

Twin or multiple-fetus pregnancies don’t only pose a threat to the calves, but to the mother as well. Most of them are prone to various clinical diseases which can lead to death if they are not handled accordingly.

The cases of mastitis, ketosis, metritis, and retained placenta are the most common and they often occur because the immune system is weak.

Unlike the human female uterus which comes back to its original size after giving birth, a twin pregnancy in cows extends the stretching limit of this organ that won’t contract as fast after giving birth. Therefore, new moms can accumulate microorganisms in the uterus, which can lead to infections.

As for the newborns, they aren’t born with strong immune systems and the only way to strengthen their health is through the consumption of maternal milk. The first milk is called colostrum and it usually contains the highest amount of nutrients and vitamins to boost the immune system of the calf.

Unfortunately, the mother doesn’t produce enough colostrum to support two or more babies at the same time, meaning one of the babies should be fed by another milking cow.

We strongly recommend talking to a veterinarian prior to the birth and discussing the possibilities and the odds for keeping both twins alive after birth. The vet may suggest bottle feeding and vitamin supplements for the newborns, aside from breastfeeding from the cow.

Bear in mind that newborns are extremely weak and sensitive, so you should pamper them as much as possible. Make sure the mother and the baby or babies have a warm and welcoming home, with enough food to improve their health systems in the following days.

Scroll back to top