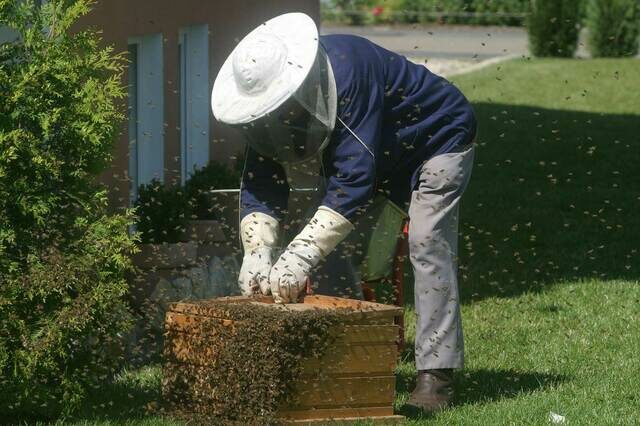 In case you’ve seen our recent article on beehives, you might be wondering whether this activity is dangerous or not. Many people avoid this activity because of the risks it involves, but many times we tend to imagine things worse than what they actually are.

Since for some people beekeeping is a hobby, this means that pretty much anyone interested can do it as well, with the proper research. It’s true that bees are fascinating creatures that have a lot of particularities, and you need to learn these in order to keep a successful and healthy hive.

On the other hand, you should know that beekeeping is truly dangerous for those who have an allergy to these insects and their stings. Such a condition usually applies to a small number of people and fatal reactions are quite rare, but nevertheless, you should have your doctor run some tests, before doing anything else.

You might want to do the same for the other members of your family as well, in case they are going to be near the hive once you install it. Another thing you might want to know is that honey bees are not usually aggressive, but you do need to learn the right beehive management in order to be successful in this task.

This way, you will ensure both the health of these marvelous insects, as well as a low risk of stings. Of course, even good management doesn’t mean that you can get rid of all the risks, but it’s definitely a good start.

In the following lines, you’ll find some of the main tips and tricks you should know in order to make sure you can keep your hive without too many problems.

This is certainly not a fun experience to go through, and most of the times bees sting because something was not done right. Never think that they have some sort of vendetta since all they want to do is live in peace and mind their own business.

The mistake many people make is that they fear honey bees as much as they fear yellow jackets or wasps. However, honey bees have a different anatomy which doesn’t allow them to sting more than once in their lifetime. The stingers remain lodged within the victim and the bee dies soon after the attack.

This is a good indicator that bees don’t use their stingers unless they have a very good reason and feel that they are in real danger. Wasps and yellow jackets, on the other hand, don’t have the same anatomical construction, which means they can sting more than once, but this is another story.

When honey bees are away from the hive, they are mostly interested in pollen and foraging for nectar, so there’s a small chance they will sting. They do become aggressive when they think the hive is under an immediate and real threat, which means that you should be familiar with rules of safety about how to best handle them.

Of course, no matter how peaceful they might be, your safety always comes first, so you need to have full protective clothing and equipment, so that you avoid any risks.

Is that an attack or not?

In most cases, bees land on a person thinking that he or she might be a flower, especially if the clothing is in bright colors or a certain strong perfume is used. Furthermore, since they have furry legs, they can easily get caught up in clothing or hair, and they might panic or sting in the process.

It’s important to control your reactions and not to wave your hands trying to get rid of the little fellow since this will lead to even more panic on its behalf. Once they realize they landed on the wrong target and that you are not food, they will almost always leave and get on with their business.

However, things might not be as easy to handle for those who are dealing with allergies. For a small percentage of the population, bee stings can lead to anaphylaxis, which is what such a strong reaction is called.

The symptoms may include swelling, pain, and vomiting, and can be very dangerous since they develop in a very short time and an immediate response is needed. For this reason, it would be best to see a doctor and run complete tests before starting any hobby that involves bees.

When are bees aggressive?

As we’ve already mentioned, bees are not usually aggressive and they go on with their daily activities unless otherwise provoked. Most of the times, what we perceive as aggression is, in fact, their defensive behavior when they think they are under attack or stress, particularly if they think the hive is under an immediate threat.

On the other hand, these honey-producing creatures can also be moody. Things such as the seasons of the year and environmental factors can influence their behavior, which means that sometimes they are more prone to snap at an intruder. If you want to visit a beehive, then the right time to do so would be during a bright and warm day when its inhabitants are out foraging.

As you may very well imagine, there are other factors that influence their temperaments, such as vibration. When you go near a beehive, make sure that you don’t knock it over by accident since this might be perceived as an attack. The same goes for noisy machinery that is best kept away from the colony. Other things, such as lawn mowers, are a factor of stress for the bees.

If you do get stung by a bee, pheromones are released in the process, which might lead the other bees trying to sting as well. In case this happens during a normal inspection, you might want to reassemble the hive and allow them to cool down. You should also wash the bee suit rather often since an accumulation of venom on it can cause them to become aggressive.

A few words about the queen

Any hive should have a queen and the behavior of the entire colony is regulated by her temperament. A queen gives off substances known as pheromones that get further around the hive, telling the other bees that she is there and that she is healthy. If the queen dies, the bees tend to become a lot more protective until a new queen is found.

There are thousands of species of bees around the world, and some of them tend to be more aggressive, such as the Africanized ones. Therefore, before getting a hive, you might want to do some research and talk to experts near you, to make sure that you get a more docile breed, especially if this is the first hive you are going to maintain.

Even then, the genetic pool has changed in the last years, given that species were moved around the world so you might end up with a more aggressive queen that will influence the behavior of the entire colony. If that is the case, you can try and replace the queen with a more peaceful one.

All in all, if you want to give beekeeping a try, remember that when you are around them you should remain calm, move slowly, and treat them with respect. Remember that bees are not bad, only the beekeeper can be bad.